Northwest MLS brokers see signs of life based on February’s improving inventory. Here’s what local real estate expert, Frank Hawkins of Hawkins-Poe Real Estate, Fircrest WA, along with Northwest MLS experts see regarding the March market for potential buyers and sellers.  Multiple offer situations are the norm for today’s home  buyers, but some brokers with Northwest Multiple Listing Service suggest February’s improving inventory and a slowing pace of price increases may ease some of the competitive pressures. Commenting on the latest statistical report from Northwest MLS, representatives of the service expressed optimism for the housing market as pandemic-related restrictions ease, but also uncertainty due to the global economic crisis around Russia’s invasion of Ukraine.

In February, we saw an increase in listings, which could be an indicator that more sellers are primed and ready to go.  Northwest MLS brokers added 7,920 new listings to inventory during February, a 6.8% improvement from a year ago, and a gain of more than 33% from January’s total of 5,927.  “Pierce and Kitsap  Counties both saw increases of nearly 10% in new listings when comparing February of 2021 to 2022,” commented Frank Hawkins. “That good news was overshadowed by slightly higher increases in new pending sales for both Counties. When balancing the two, total inventory remained at slightly more than two weeks of active listings available.”

Danielle Hale, the chief economist for Realtor.com, said the pace of home price increases may slow from double-digit to single-digit percentages this year. She also expects conditions will likely continue to favor sellers. Freddie Mac believes short-term mortgage rates will stay low but are likely to increase in the coming months. The mortgage finance giant said geopolitical tensions caused U.S. Treasury yields to recede last week as investors “moved to the safety of bonds.”
Along with inflationary pressures, Freddie Mac points to “the cascading impacts of the war in Ukraine” for creating market uncertainty.

According to Freddie Mac, the average rate on a 30-year, fixed-rate mortgage was 3.76% on March 3, down from two weeks prior when it was 3.92%, the highest rate since May 2019. A year ago, the average rate was 2.81%. The Mortgage Bankers Association forecasts average rates will be slightly above 4 percent by the end of 2022. Mortgage data provider Black Knight estimates the average borrower with a 20% down payment would pay about $100 more a month on a new mortgage than one taken out at the end of last year due to rising rates and higher home prices. 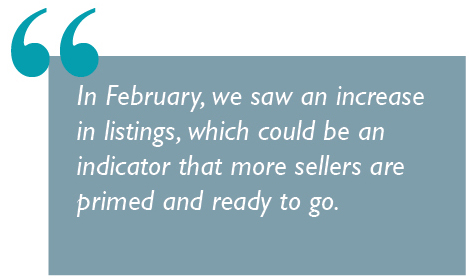